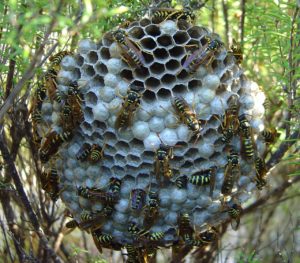 Wasps are flying insects that build nests and are notable for their ill-tempered disposition. Wasps, unlike bees, can sting multiple times and can cause death due to the ferocity with which they swarm prey.

What are their habits?

Wasps will literally build their nests everywhere and anywhere. They are incredibly protective of their nests and extremely aggressive. The bottom line is if you see a wasp nest, be sure to steer clear of it and call in professionals to remove it. Wasps have no qualms about stinging multiple times – unlike bees they do not lose their stinger.

What is their life cycle?

Wasps can live up to 1 year, and during that time can become especially aggressive, especially in the summer. The queen continually lays eggs and produces both sterile and fertile drones. Wasp nests will last generally as long as the queen is alive, however the queen can lay female eggs, thus ensuring the viability of the nest.

What damages and diseases can do they bring to the household?

Wasps are extremely aggressive and depending on the person, can cause anaphylactic shock with their stings. It is imperative that if you find a wasp nest in your house to call Safe Home Pest Control so they can safely remove the wasp nest so that you can enjoy your home without having to worry about the wasps.